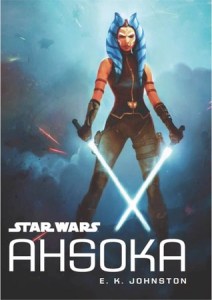 Fans have long wondered what happened to Ahsoka after she left the Jedi Order near the end of the Clone Wars, and before she re-appeared as the mysterious Rebel operative Fulcrum in Rebels. Finally, her story will begin to be told. Following her experiences with the Jedi and the devastation of Order 66, Ahsoka is unsure she can be part of a larger whole ever again. But her desire to fight the evils of the Empire and protect those who need it will lead her right to Bail Organa, and the Rebel Alliance. (Description from Goodreads)

(***Please note that this review may contain spoilers***)

I started reading Ahsoka because she has become one of my favorite Star Wars characters. I watched The Clone Wars series with my husband (during quarantine) and was hooked. Ahsoka is a strong female character and I truly enjoyed watching her story unfold and was devastated when she left the Jedi Order.

To start my Star Wars Canon Reading Challenge I wanted to find out more about her story after Order 66. I wanted to know where she ended up, what she was doing, and was she still using the force. This book didn’t disappoint and I saw much of the Ahsoka I came to know watching The Clone Wars, but she had new struggles to deal with and unfortunately, was dealing with it on her own. There were no other Jedi she could lean on anymore.

Ahsoka was looking for a planet with a small population; somewhere where she wouldn’t be recognized and can lay low. Raada was exactly what she was looking for at first. Most of the book is centered around what happens on Raada, but also focuses on Ahsoka’s struggle with keeping her Jedi powers a secret. She wants to protect those around her, but she also wants to protect herself and any fellow Jedi that may have survived after Order 66. So she blocked herself from the force.

At some point the Empire decides to take over the agricultural moon to use their soil and their labor for their own agriculture project. They forced the town to plant and harvest something that the Imperials could consume in low gravity environments. I think the food source was intended to be used for those working on the Death Star project, but that’s just my theory and what it made me think of.

Ahsoka teams up with several of the locals and comes up with a plan to sabotage the Imperial walkers, but they were doing it in a way that would make it seem like they got destroyed due to the elements of Raada. Their plan would have worked if it hadn’t been for a few other locals having their own plan to attack the Imperial base. Their plan went wrong and Ahsoka had to try and save those that were a part of this secret plan. Some ended up dying and Ahsoka finally had to reveal her powers to save as many others as she could.

She eventually had to leave Raada to protect everyone else because now that she revealed she was a Jedi the Empire would be looking for her again. She was right. This is when the inquisitors are introduced that we end up seeing in the Star Wars Rebels series. The inquisitor is tasked with finding this Jedi and destroying them.

Once Ahsoka is off Raada she goes back to the planet where the book started and she had to flee from. She gets her old job back with the Fardi family and continues fixing things for them. She ends up gaining their trust to make deliveries in their ships. While making these deliveries she takes on some of her own missions to help others. The missions aren’t planned, she just helps those when she comes across them so that she doesn’t get the attention of the Empire.

Her good deeds don’t go unnoticed by Bail Organa of Alderaan. He could tell these are the acts of a Jedi and he tasks a few of his pilots to find them. He doesn’t know who it is yet, but needs to see if this Jedi can be persuaded to join the rebellion he’s building in secret.

Eventually Ahsoka and Bail meet again and she’ll help his rebellion with one favor. She needs help saving the people of Raada. So Ahsoka ends up going back to Raada and fighting this inquisitor. She wins of course, but ends up getting her new kyber crystals for her lightsabers in the most unlikely place (I don’t want to give this away). She saves the people of Raada with Bail Organa’s assistance.

I tried not to get too deep into details when writing this review, but I needed to get across that no matter where or what Ahsoka does she’s going to be pulled back into the war and fighting the Empire. She’s a good person and doesn’t want to see anyone suffer, so she risks her own life (revealing her Jedi powers) to save others. She is heroic and strong. I feel that even though she closed herself from the force for so long she became even stronger than before after deciding not to hide it anymore. Stronger than when she was in the Clone Wars.

I really enjoyed reading this book because I had just finished watching Star Wars Rebels so it was nice to put a a few other pieces together on how Ahsoka and Bail Organa teamed up again and how Fulcrum started.

I highly recommend the book Ahsoka if you’re a Star Wars fan and want to know more about this character or the storyline leading up to the Star Wars Rebels series.

E.K. Johnston had several jobs and one vocation before she became a published writer. If she’s learned anything, it’s that things turn out weird sometimes, and there’s not a lot you can do about it. Well, that and how to muscle through awkward fanfic because it’s about a pairing she likes. (Bio from Goodreads)