Teaser Tuesdays | The Race for Paris by Meg Waite Clayton 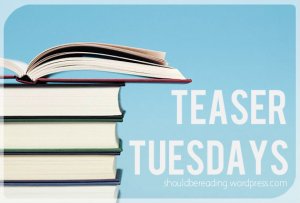 Teaser Tuesdays is a weekly bookish meme, hosted by Jenn of A Daily Rhythm. It’s easy to participate. Just do the following:

• Grab your current read
• Open to a random page
• Share two (2) “teaser” sentences from somewhere on that page
• BE CAREFUL NOT TO INCLUDE SPOILERS! (make sure that what you share doesn’t give too much away! You don’t want to ruin the book for others!)
• Share the title & author, too, so that other TT participants can add the book to their TBR Lists if they like your teasers!

TITLE: The Race for Paris

What was it like to be a driven and talented woman journalist in a world restricted by military regulations and gender barriers? Bestselling author Meg Waite Clayton delivers answers in her highly and widely anticipated new novel, The Race for Paris. Opening in Normandy on June 29, 1944, the novel follows two tenacious American female war correspondents on their quest to document—and make—history by covering the liberation of Paris from the center of the action. Inspired by real women like Martha Gellhorn, Margaret Bourke-White, Dot Avery, and Lee Miller, who took bold, grave risks to prove that they could report from the front lines of WWII just as powerfully as men, The Race for Paris firmly reflects historical facts and details, while pulsing with immediate drama—and a chilling, timely sense of wartime danger.

Told from the perspective of Jane Tyler, a young, single, adventure-seeking reporter for the Nashville Banner and the only daughter of an ostracized unwed mother, The Race for Paris is also the story of Olivia “Liv” Harper, an Associated Press photographer with a supportive husband who is the editor-in-chief of the New York Daily Press. While Jane is resigned to making the most of her assignment covering a field hospital, Liv is set on capturing the war—and the jubilant liberation of Paris from Nazi occupation—from the front lines. After failing to win over her CO, Liv goes AWOL. Seizing her shot to make a name for herself, Jane joins her. Enlisting the help of a tentative ally, British military reporter Fletcher Roebuck, the two intrepid women set off across the perilous French countryside on a race to reach Paris and out-scoop formidable male competitors. Along their journey, Jane, Liv, and Fletcher continually confront obstacles, and cross paths with gunfire, carnage, and death. Their mission is further complicated by emotional bonds, romantic tensions, and one woman’s secret—a secret with the power to end her career and, perhaps, her life.

Reflecting the extraordinary courage and determination of pioneering women in journalism—women who paved the way for respected war correspondents such as Christiane Amanpour, Oriana Fallaci, and Lynsey Addario—The Race for Paris is a gripping novel celebrating the power of women, then and now. (Description found on Meg’s Website)

“Liv and I ducked into the nearest building, an empty school-house, and sank into little chairs in the first room we came into. The seats were hard, the smell of eraser dust stifling. The room had been used as some type of command post: There were lists written in German on the chalkboard. Maps and elevations taped to the walls marked the locations of troops, planned lines of attack, points of the earth seeded with mines. I went outside again, but that was worse: the bright sunlight, the dark curls blowing across the square.” (pg. 126)