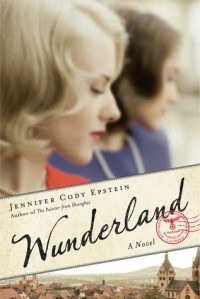 East Village, 1989
Things had never been easy between Ava Fisher and her estranged mother Ilse. Too many questions hovered between them: Who was Ava’s father? Where had Ilse been during the war? Why had she left her only child in a German orphanage during the war’s final months? But now Ilse’s ashes have arrived from Germany, and with them, a trove of unsent letters addressed to someone else unknown to Ava: Renate Bauer, a childhood friend. As her mother’s letters unfurl a dark past, Ava spirals deep into the shocking history of a woman she never truly knew.

Berlin, 1933
As the Nazi party tightens its grip on the city, Ilse and Renate find their friendship under siege–and Ilse’s increasing involvement in the Hitler Youth movement leaves them on opposing sides of the gathering storm. Then the Nuremburg Laws force Renate to confront a long-buried past, and a catastrophic betrayal is set in motion…

An unflinching exploration of Nazi Germany and its legacy, Wunderland is a at once a powerful portrait of an unspeakable crime history and a page-turning contemplation of womanhood, wartime, and just how far we might go in order to belong. (Description from Goodreads)

(Before reading, please be aware that this review may contain spoilers)

Where to begin…lets start with I LOVED THIS BOOK! It has history, love, lies, and tragedy. I also really like the cover and was happy it gave me a sense of what the two main characters might look like. I never wanted to put it down.

Now, to dive right into it…

I’m always drawn to historical fiction that specifically surrounds World War II. It was such a sad and devastating time that I believe it should be written about. We should never forget how terrible this point in history was and should always be reminded of it with books like Wunderland.

It reminded me of a much sadder female focused version of The Boy in the Striped Pajamas. Wunderland delve more into the details of what it was like when Jewish families and businesses were being destroyed. With Renate’s story, it gave detailed descriptions of how Jewish children were treated in school by both their full German blooded peers and teachers. You can get a sense of how hard and confusing it must have been for children when the friends they were so close to turned on them or when teachers (adults) that are supposed to teach and guide you start treating you like dirt. Then seeing your family and everything around you fall apart.

On the flip side, the character Ilse was a young German girl who got sucked into the Nazi party. Ilse was part of the BDM (Band of German Maidens) which was “the girls’ wing of the Nazi Party youth movement.” So as we follow Ilse’s story we get a sense of what was going through their minds as they wrote about Jewish people and were punishing them. Ilse herself had done some unspeakable things in the name of the Nazi party, but lived with the guilt of all that she’d done. Even though she’s a fictional character, I believe that there were so many young German girls and boys corrupted and their minds manipulated by the Nazi party making them believe what they were doing was right even though it was awful.

Overall, Wunderland is an incredible depiction of the terrors that came from the Nazi party and World War II. I would highly recommend reading this amazing book. As a side note, I feel Wunderland is worthy of becoming a movie one day. I certainly would watch it and probably cry my eyes out.

I am the author of the forthcoming Wunderland, out April 23 with Crown Publishing. My prior works include The Gods of Heavenly Punishment, winner of the 2014 Asian Pacific Association of Librarians Honor award for outstanding fiction, as well as the international bestseller The Painter from Shanghai. I have also written for The Wall Street Journal, The Asian Wall Street Journal, The Nation (Thailand), Self and Mademoiselle magazines, and the NBC and HBO networks, working in Kyoto, Tokyo, Hong Kong and Bangkok as well as Washington D.C. and New York. I’ve taught at Columbia University in New York and Doshisha University in Kyoto, and have an MFA from Columbia, a Masters of International Relations from the Johns Hopkins School of Advanced International Studies, and a BA in Asian Studies/English from Amherst College.

I currently live in Brooklyn, NY with my husband, filmmaker Michael Epstein, my two amazing daughters and an exceptionally needy Springer Spaniel. (Bio from Author’s Website)

Thank you to Crown Publishing Group for providing a copy of this book in exchange for an honest review.