On October 4th, I went to my very first Blake Shelton concert during his Ten Times Crazier Tour.  I’ve always loved Blake Shelton, just never had a chance to enjoy his music in a venue with thousands of other fans.  Let’s blame it on the college budget and lack of money to purchase any concert tickets.

I’ve never been to a concert and had the performer tap into several of my emotions like Blake Shelton did.  I was crying, laughing, and having a blast.

The host that night was country legend, Neal McCoy, who I remember listening to when I was young.  He sang songs like The Shake and No Doubt About It, which got me reminiscing about when I was younger and would dance in the living room with my mom.  I was thinking about my mom a lot that night.  She passed away on September 20, 2008 and we had her funeral on October 4, 2008.  So it was an emotional night for me since it had been 6 years to the day that I laid her to rest. 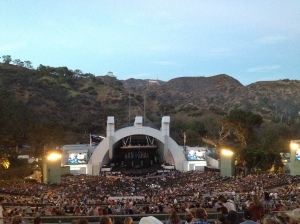 While there were some songs that pricked my heart a bit, Neal had great stage presence and would interact with the crowd during transition periods.  He’d make jokes and even held a contest during the show.

The opening act were country singers Dan & Shay who played some familiar songs that I had heard over the radio and actually liked.

When The Band Perry came out, I felt like we were getting two concerts for the price of one.  Their performance was amazing and they played a few favorites of mine.

By the time Blake Shelton came out I was super pumped.  I was crossing my fingers that he’d play Who Are You When I’m Not Looking and God Gave Me You and he totally delivered.  Blake knew how to keep the attention of his fans, making us laugh when he brought out his cowboy hat, which had long wavy hair attached to it.  This was to transition into his older songs that we all love and when he rocked those long curly locks.

There was a particular song that Blake sang which made me almost break down and cry right there in the Hollywood Bowl.  He brought his guitar out and started singing Over You, which his wife Miranda Lambert originally sang.  The song was about Blake’s brother who was killed in a tragic car accident and if you haven’t heard the song, please go listen to it.  If you’ve ever lost someone close to you the song will probably make you tear up.  This is exactly what I was doing when he sang it.  I closed my eyes and just listened to every word, soaked it in, and thought about the good times I had with my mom when she was alive.  The concert had been a good distraction up until that song, but Blake sang it so amazingly and I felt like my mom was with me in that moment.

His concert was the best one I’ve been to in years and I plan on going to many more.

As a side note, I briefly met Blake Shelton after The Voice Season 3 finale.  I felt so stupid when I asked him to take a picture with me because I could barely speak.  I was so nervous meeting someone I thought I would never get the chance to see in person and I thought I was going to faint for the first time in my life.  I know…I sound like a crazy fan, but I promise I’m not.  I got lucky when I had the chance the take a photo with Blake Shelton.  He was so nice about it and was totally willing to take a minute of his time so that I can have a picture that would make me happy and make my day.

Thank you so much Blake Shelton (if for some reason this actually gets to you)!