Kat headed toward the ocean and I followed, relieved when she stopped at the dark wet sand. The white water rushed toward us and we ran backward before it wet our shoes. Kat pulled a big shell out of her pocket and set what looked like a sunflower seed in the center. The clouds shifted and the moon appeared, lighting the sand around us. Standing behind Kat, I watched her kneel down and place the shell on the sand. She drew a triangle around it with her finger.

“A symbol of our desire,” she murmured, so softly it sounded like she was talking to herself. “So that the sea powers will receive the spell.” I had to strain to hear her over the roaring of the waves. She looked up at me over her shoulder. “So we find the gem seeds?”

I nodded. To let her know I got it.

Then she pulled the pearls, white pebbles, and flower petals out of her pocket and set them down in a circle around the shell with the seed on it. “The tide has to bring the waves across the shell,” she said, as the white water sizzled forward, but not close enough. “And now the words of enchantment.” Kat cleared her throat and began to speak slowly as the sea welled up in the distance.

“Goddesses of Moon, Earth, and Sea, my wish in thy names must come to be.
Powers and forces which tides do make, I summon your waves, my spell to take.” She stood up and we backed up into thick, dry sand just in time. A powerful wave broke, sending white water splashing across the wet sand and over the shell and back, carrying the seed and her other offerings out into the dark ocean.

Kat brushed sand off her hands. “OK, we’re done here. Now, to the caves. We’re looking for the third one.”

I tried to keep my voice from shaking. “The third cave?” Another huge wave slammed the shore and I felt it vibrate beneath my feet. The water hissed and rumbled as it moved down the beach like a train escaping down a track.

“Yes,” she called over her shoulder. “The map shows a series of caves, and we need to look inside the third one for the gem seeds. We just have to be careful that the tide doesn’t come in while we’re inside a cave. Or we’ll get trapped.”

She walked faster. I followed with my heart pounding, imagining cold water flooding into a cave and drowning us. I wished that I had brought my pepper spray—or a life jacket. Something that would protect me. From what, I wasn’t sure. Looking back the way we’d come, I hoped to spot Kat’s house up on its stilts so I knew how to get back. But the coastline had curved and I couldn’t even see the staircase any longer.

“Sky,” Kat cried suddenly, pointing across the black sand. “Look. There they are.” I was more concerned about the rising tide, and looked out over the dark rumbling ocean. White spray flew up in the air as another huge wave crashed nearby. So loud it sounded like a refrigerator fell off a tall building and landed right next to us. I hurried after Kat as the water rushed forward. “This is it. Three caves.” Moonlight cast shadows behind the boulders that guarded the entrance. We darted around them and climbed under the rock arch.

The dark cave stunk of washed-up kelp, dank and rotten. I shuffled forward on the damp sand with my hands out in front of me like a sleepwalker, hoping I wouldn’t stumble over a rock or bash into a wall. I pulled out my flashlight and turned it on. As soon as its beam lit up the cave, heavy flies woke up, buzzing around the seaweed and bonking into my face. I ducked, swatting them away. Kat hurried past me and rushed toward the back of the cave, peering at the ground. Suddenly she cried, “Skylar—here they are. I found the gem seeds!” Hidden between the boulders, disguised as wet pebbles, shining gem seeds winked up at us.

Bending down with my hands shaking and the flashlight beam bobbing, I picked up seedpods as fast as I could while the icy water crept closer and closer. I had a handful of pods when it became too late to stay another minute. A huge wave exploded on the beach and cold air poured into the cave. Seconds later seawater soaked through my tennis shoes, freezing my feet.

The tide was coming in. “Kat—we have to leave. Now!”

She looked outside the cave and the shock showed on her face. White water covered the rocks and sand that separated us from the ocean. “You’re right. If we stay here any longer we’ll get trapped.” Kat rushed past me and I hurried behind her out into the freezing air. I dropped a gem seed but I didn’t care. Kat tore across the sand so fast I could barely keep up. If she lost me and another huge wave broke, I was dead. My feet churned through the wet sand and my calf muscles started to ache but I kept on running. It was so dark I wasn’t sure we were even heading toward her house. I just followed the sound of her feet crunching the sand, gulping air as I ran, afraid I would suddenly feel someone’s hand on the back of my neck or a freezing wave breaking over my head. It was so dark I couldn’t tell if I was getting closer to Kat’s house or if I was about to stumble into the sea.

Then I saw it. In the distance a tiny light flashed on and off, like it was trying to guide us home. My heart sped up. Kat and I ran toward it and it got brighter. I turned my flashlight on and off, signaling back. Strong waves smashed the shore as we plowed across the sand. It felt like we ran for blocks before finally reaching the back staircase. Devon stood at the bottom. The flashlight was so heavy it was straining his fragile wrist. He clicked it off for the last time.

“We made it,” Kat said triumphantly, like it was her accomplishment. She shoved past her brother, heading up the wooden steps.

“Glad you did,” he said, looking me in the eye as he dropped the heavy flashlight to his side.

“She always sneaks out at night,” Devon whispered. “I figured she wouldn’t wait for you and you might get lost.” He held out a small fist to bump my knuckles and I grabbed him in a hug instead. Then I staggered up the creaky stairs behind Kat, holding the gem seeds tightly in my fist. 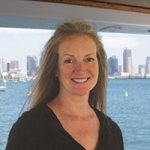 Carrie Cross is an avid reader who fell in love with books as a little girl after reading Goodnight Moon. She wrote her first “book” at age four: Blackie the Little Black Dog and the Flying Washing Machine. Carrie discovered her love of mysteries reading Nancy Drew books and The Happy Hollisters series, and after writing THE MYSTERY OF SHADOW HILLS, she continues to look for clues in unexpected places to this day.

Carrie Cross has generously provided (1) e-book copy of Skylar Robbins: The Mystery of Shadow Hills. This giveaway will run until March 14th.

Carrie Cross week continues tomorrow with an excerpt of Skylar Robbins: The Mystery of Hidden Jewels.